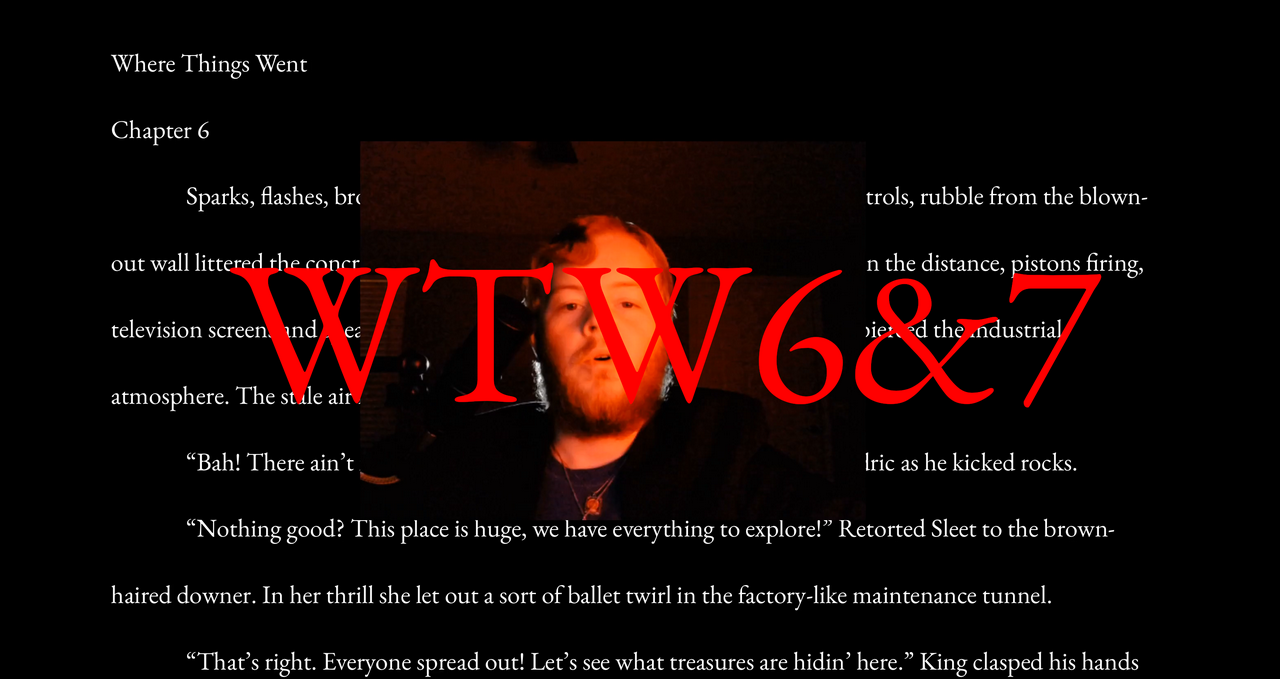 “Pfft! There ain’t nothing good here. What a waste.” Complained Fredric as he kicked rocks.

“Nothing good? This place is huge, we have everything to explore!” Retorted Sleet to the brown-haired downer. In her thrill she let out a sort of ballet twirl in the factory-like maintenance tunnel.

“That’s right. Everyone spread out! Let’s see what treasures are hidin’ here.” King clasped his hands and skipped ahead, gleefully leading charge into the unknown. The mob bustled forward searching for steps or an elusive elevator whilst whispering to one another…

“You think the stories are true?” Asked one. “Look at King! The Crown was true, there’s gotta’ be somethin’ here!” Replied another.

They all ran past Sleet and Esrael leaving them to catch up. Esrael slumped his shoulders, sighing deeply he held his face.

“With them? Well... I don’t know. I don’t know all the stories about this place. But for some reason I…” Sleet looked up at the strobing red light. “I feel drawn here. Like home.”

“Then go on. Tell me all ‘bout the secrets later. I’ll keep an eye out for our pals.” Esrael revealed a pack of cigarettes from his coat and flicked a desperate lighter a couple times. The scratched dented metal lighter had what appeared to be crude drawings etched into it. Coaxing out the flame, he took a hearty drag. He waved the curious girl on.

She could hear muffled voices of the brothers far ahead but Sleet took her time adventuring more deliberately. The red strobes continued down this impossibly long hallway. Eventually she discovered tinted windows in crosshatch patterns embedded up the entirety of the Tower. A one-way mirror of sorts, only visible from the inside, never visible on the out. This bore a marvelous view of the cityscape. Yet, strangely, she walked straight, flat, normal. But the view out these windows was tilted at a perfect right angle. She stood perpendicular to the world whilst feeling no different herself. Another illusion?

The dead concrete floors ultimately lead to tracks for potential locomotive transportation. No cart or contraption was nearby. It was deduced that this tunnel truly ran the length of the Tower, going up. Sleet continued her monotonous trek through this eternity. More heavy metal doors. White light crept out the cracks of one of them. A peering glance through the thin opening beheld even more fascination. People moved inside (they were not our brothers). She couldn’t see clearly, what she did see was unsettling, bizarre even.

What unified them besides their messy appearance was a strong undertone of brown and beige. So powerful was this color it seemed to radiate from them. Sleet did not understand the peculiar creatures whom she just encountered, but their true class was known as the Instrumentalists. They were the curators, the maintainers, the operators of the Tower hidden away from all else. But… For what purpose? Sleets lengthy pondering was interrupted by a wash of solid yellow light that pierced the strobing red. A rumbling creaky squeak of metal bound her direction. A terribly large trolley bustled her way leaving no room for escape on either side.

In a manic effort not to get run over she searched for a door handle, doorknob, anything to open! There was nothing to grasp. Instead she pounded helplessly on the door as the danger advanced closer, closer, closer. Right before inevitable impact, the door swung open inwardly and threw her to safety at the feet of the confused Instrumentalists. Dazed, squinting, she met the hidden faces of the solemn workers circled around her. They said nothing. They breathed raspy breaths beneath their masks.

Eyes wide, mouth agape, Sleet scrambled to get up. She burst through their encampment in search for return to the tunnel. Instead she found a totally different door that lead to a much much different place. She slammed the door behind her and leaned against it, preventing whatever she could from entering as she regained her breath. Assessing her new surroundings induced a different kind of excitement. She beheld a great auditorium with a stage far down the steps.

Dozens of rows of empty seats lined the steps leading down to the immaculate wooden finish on the main stage. Tremendous red curtains draped themselves across the stage connected up high to the vaulted ceiling. At this moment a series of automated spotlights sprung to life and danced across this velvet surface. A piano played an elaborate introduction tuned like that of an old western saloon. The welcoming, cheery introduction lead to the drawing back of the hulking curtains.

A woman dressed in dazzling, albeit somewhat gaudy red apparel situated herself center-stage with her backup band. The backup band comprised itself of the very same spooky Instrumentalists. The woman in the middle who stepped up to a vintage microphone intentionally set herself apart. With renewed vigor the band kicked into full gear, piano, fiddle, and banjo together. The woman began to sing.

Mesmerized, Sleet took her weight off the door to get a better look. As soon as she stepped away the show-runners she intruded upon shoved the door open and sent her tumbling down the steps. Painfully, Sleet crawled back up and noticed the spotlights directed quite literally at her. Now she was the star of the show. The instrumentalists at the top of the steps gazed upon her, the band members cut the music, and the singer wore a furious expression.

“What are you doing!? I have never been so rudely interrupted! What is the meaning of this!?” Cried the red-dressed Performer as she menacingly looked around at the different operators. In unison, they all pointed at the girl whom the singer so obliviously overlooked. With extra surprise she joined the others in pointing an accusatory finger at the foreigner.

“You! How dare stop my performance! You!… You… Oh my. My lady Snow, please forgive me! I did not realize it was you. It is an honor to have you here. It has been far too long.” In a dramatic shift in tone the red-dressed Performer bowed humbly, giving a respectful curtsy. The Instrumentalists followed suit with a hand across their chest and a small bow of the head.

“My lady I ask again for your forgiveness. Please, let my musicians return you to your studio. If you came to enjoy my performance I am afraid my foolishness has soured the mood.” The performer held her curtsy eagerly anticipating mercy from the girl. Sleet, playing along, replied…

“Y-yes, of course. I forgive you.” Meekly, Sleet smiled and attempted to look official in some capacity.

“Thank you, I am grateful. Now musicians please take care of our lady and take her home.”

Immediately the three musicians descended from the stage and politely lead Sleet through a rear exit. Unsure what else to do, Sleet followed.