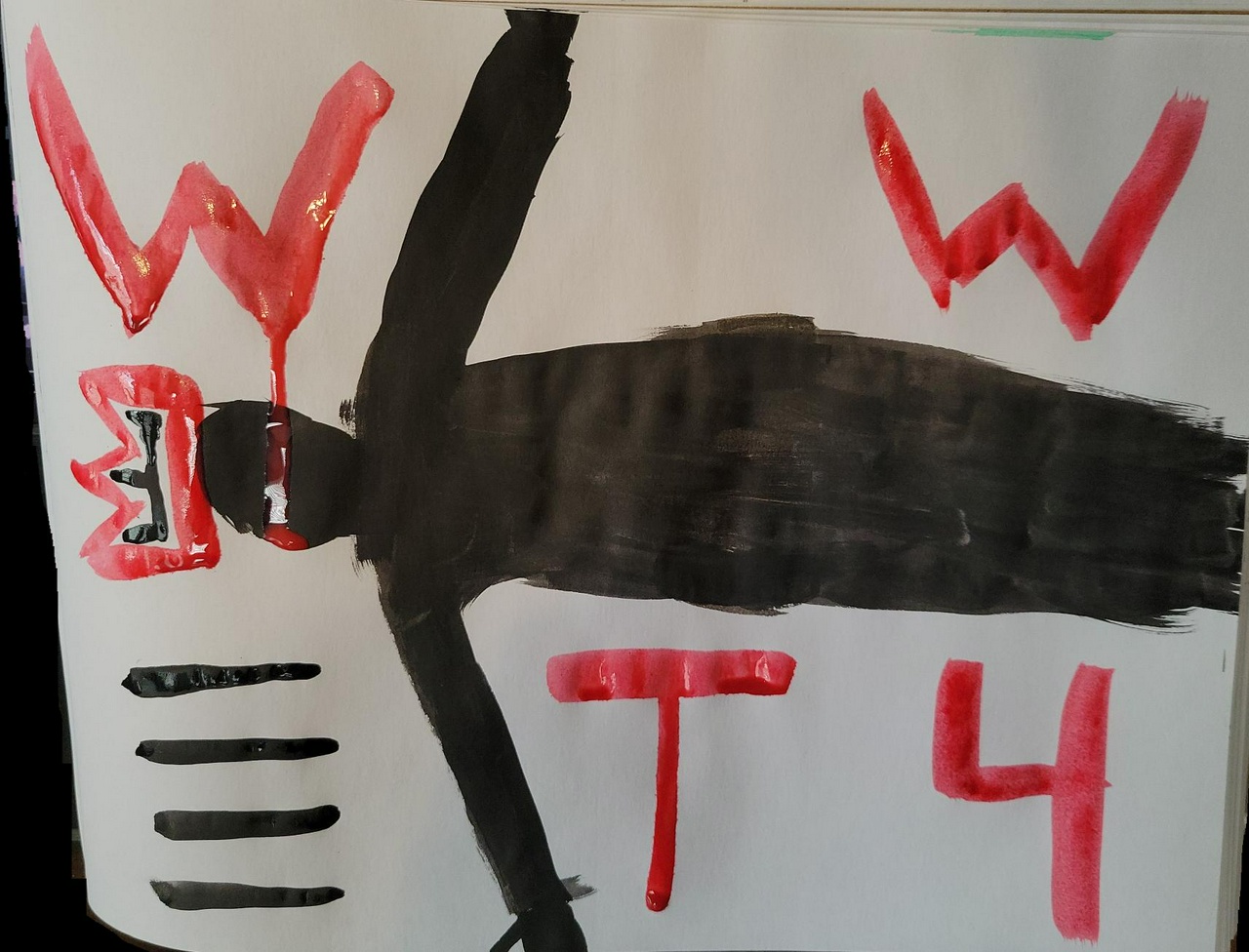 “I don't remember going this way the first time.”

“Don’t worry, it’s not much farther.”

Feign reassured her escort as they traveled back into the bowels of the City. Sleet crossed shadow and light, each time they drifted into the shadows Feign instantly reappeared at Sleet’s side in full form. Just as quickly Feign would disappear back into the safety of Sleet’s shadow once light was tripped. One or the other, only the two, never both.

Sleet took quite well to her new companion considering the frightful beginning of their relationship. And Feign’s peculiarity only added to the intrigue, the mystique. Taking note of this either-or yin-yang existence, Sleet thought of a potential conundrum. What would happen if Feign was encircled by light without a proper place to hide? She decided against voicing this question.

Atop a hill over shadows of crossed power lines Sleet balanced playfully on one foot and swung her arms wide out to her sides. Then took the smallest, most careful step with the other to walk the imaginary tightrope. She was endlessly tickled her new friend was bound to mirror her movements. Feign kept up well with Sleet’s antics but her patience was not without its limits.

“What was that black wall I saw?” Asked Sleet.

“That’s where we come from. Not just us but many others. This City was once beautiful. The City of Wonder! Sadly, they closed themselves off long ago. Compared to out there? This place is but the tip of a needle.” Feign poked the side of Sleet’s head at the earliest convenience to emphasize her point.

“Uhuh. And what more did this King tell you? Better yet, did he have anything with him?”

Feign was hidden in Sleet’s shadow again, but she couldn’t hide the suspicion in her voice. The pair entered a fairly well-maintained courtyard that spaced itself from the cramped alleys, streets, and structures that comprised their journey thus far. The tile brickwork arrayed itself in creative, almost mesmerizing patterns. Sleet was so distracted by the time she looked up she was utterly amazed.

“He told me some stories about this Tow... er... Oh…” She finally lifted her eyes from below and realized where they stood. City center, right in front of the monolith that pierced the sky. The black Tower. “Why did you bring me here...?”

“Yes yes the Tower. He told you about the Tower. But did he have anything with him? Anything special?” Sleet could feel an imposing gaze originating from her shadow. She twiddled her thumbs innocently in an attempt to ward off the interrogation and said, “Hmm... His home had a whole lot of things like furniture, toys, jewelry, shiny stuff like... Like…”

“DA’ CROWN!” Howled a beastly voice from the edge of the courtyard. It was none other than the two rude giants from before, growling, stomping from a distance. Without a subtle bone in their body and a failed initial strategy they changed tactics to lie in wait for their prey instead.

“It's dat’ girl Boss. She was wit’ da’ rat! She got da’ Crown!” Whispered the slightly shorter one, loudly.

The overweight pair galloped after Sleet as fast as their girth could carry them. Sleet was scared stiff, her boots seemingly glued to the ground, her body petrified. So determined was the bigger Boss, he stooped down on all fours and dug in his claws as he clamored for the girl. In desperation Feign shouted, “Sleet! Run! Run to the other side of the Tower!”

Shocked back to her senses, Sleet closed her eyes and made a great sprint to the other side of the courtyard, the other side of the Tower where the sunlight didn’t show. She had difficulty keeping her feet straight as the ground shook with the pursuit of the giants. Her boots were not made for running, her clothes got in the way and she didn’t have nearly the stamina when not pulled along by a much more nimble boy.

Even so, she approached the far corner of the Tower and nearly crossed over into the darkness... But the faster of the two giants made it within arms reach of the girl. He swiped one powerful hand at Sleet’s feet knocking her to ground. As luck would have it, Sleet was so light and traveling so quickly she slid all the way into the dark.

The moment her shadow crossed this line Feign burst forth in an impressive back-flip carried by the momentum of her driver. She landed on the ground in a powerful stance as Sleet slid to a stop at her feet.

“Get up! Quickly! Run back into the City. I’ll meet you there.” Implored Feign.

Sleet let out a cough as she lazily pulled herself back together. She briefly protested Feign’s command, “But I…”

Feign leapt off the ground and spring-boarded off Sleet. The kick sent Sleet rolling across the courtyard yet again. Feign wasn’t being mean. This saved Sleet from the oncoming fist that smashed the tile brick where Sleet once stood. Feign transformed into an amazing acrobat as she sprung off the giant fist embedded in the ground to deliver a potent kick to the brutes ugly mug.

Bam! Another shadow-strike from nowhere struck Boss right on his nose. Both the fat fools staggered, whined, and held their faces in pain. Or was it rage?

They couldn’t see Feign in the darkness. She had free reign to rain little blow after little blow on our bulky foes. Tragically, it seemed Feign beat some sense into one of them. Boss wised-up, sensing an opportunity. Right after Runt received his freshest bruise Boss paused for a moment, then stomped the ground as hard as he could. The courtyard gave a little under the tremendous force and Feign (who just landed after a successful attack) yelped as she was thrown to the ground.

With thick 4 fingered hands Boss upswept the courtyard as wide as he could covering as much area as possible where the yelp was heard. Sure enough, even being blind and dumb he hit Feign and flung her far to the edge of the courtyard. She hit the ground hard, bounced once, then stopped. Sleet had taken cover in the nearby buildings but couldn’t help but rush to the aid of her friend.

She lifted Feign’s head onto her lap, a groaned response. The two giants strode victoriously toward their prize wearing devious smiles on their faces. One picked his jagged teeth, the other rubbed his hands together fervently. However, before defeat set in, the dim sunset light that flanked them on either side strengthened intensely followed closely by an iconic laugh from behind.