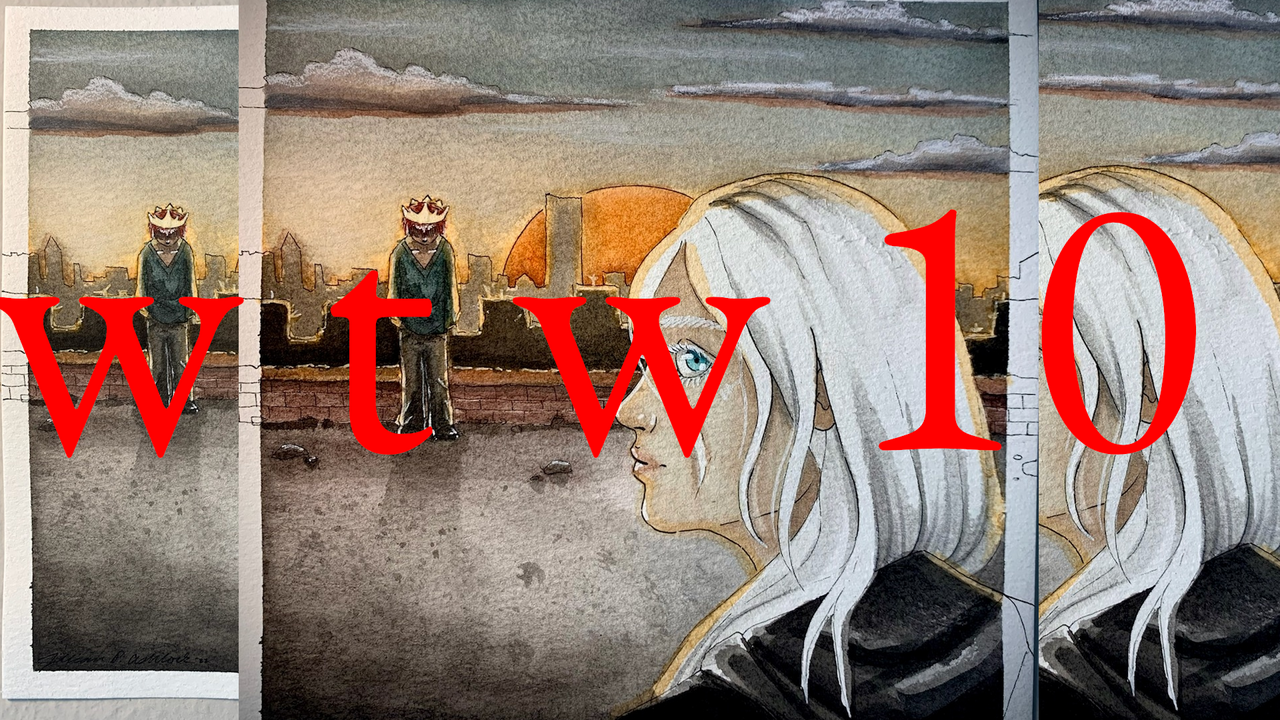 She stood at the high gates of an immaculate Mansion. Wrought iron spires twisted and contorted into woven designs obscuring the noble abode. Sleet threaded her fingers through the gate, holding her weight in her grasp she caught her breath. King was not as forgiving on this journey, never slowing down on account of his companion. Instead Sleet chased after the upset King who lead her to this magnificent place. King slipped through leaving her stuck at the gates, left to behold what new fancy lie ahead.

First was the musty burnt smell of smoke that filled her nose and brought her view up to the top of the 7-story wonder. Seven furnace-like chimneys lined the roof of this Mansion. Yet, strangely, one chimney remained still, docile, unwilling to participate in the lofty affair. They spewed pungent clouds that swirled down to King as he entered the engraved double-doors and yanked them shut. The slamming of the doors caused the smoke to abandon their host and retreat across the stone lawn. It blew through the gates, carpeting the ground all around the Mansion. There it laid.

Coughing into her arm and waving away the now overbearing aroma Sleet sought permission to enter. She lightly rattled the gate here and there. She whispering beyond to see if anyone was near to grant her wish. Strict, unsettling figures emerged from the haze offering an unintentionally intimidating presence. Masks of every sort caked with grime, grease, and mess slopped over their twitching heads. The Instrumentalist workers then shuffled away after identifying the disruptive girl.

“Sleet? What are ya’ doin’ here? Oh! What was the surprise!?” The boy Fredric promptly appeared at request of the workers. He looked more like the Instrumentalists decorated in the very same blue-collar makeup. Continually average but somewhat endearing as any little brother-cousin may be. A fledgling attempt to reign in his brown hair was quickly aborted.

“Well I…” Sleet debated revealing King’s outburst. She decided against it. “I was only following King.”

“Huh? King’s here? Aw man.” He flicked a troubled look back at the Mansion. “He’s too early! We ain’t done yet…” Fredric slumped his shoulders and sighed morosely. Without looking up he raised his fist and knocked a special coded knock on the gate. The gate responded with ugly creaking snaps eventually leading to an opening that manifested before Sleet’s very eyes.

“Ah well, come on in anyways. Rest of ‘em won’t be long.” Fredric listlessly ushered her onward but his faux-somberness soon abated.

On their short walk he explained where she found herself. The remains of the brothers disheveled hideout was given an unbelievable makeover. Fredric could not contain his excitement as he regaled Sleet with the story of how King chose him to head this important project. He, that being King, was surprisingly specific with certain “must haves”. But still much was left up to the ingenuity of Fredric. Clearly, King’s trust was not misplaced. The construction was nearly complete. Nearly, being the operative word.

As ridged and imposing as this structure was it flawlessly balanced a keen eye for detail. The largely brick beauty patterned itself in a familiar way, taking inspiration from the courtyard of the Tower. The same pattern now arrayed itself vertically interspersed with stain-glass windows of every assortment. The Instrumentalists tracked their movement towards the door. They stood in a zigzag display spaced perfectly from one figure to the next. The fog hung at their ankles. Their heads moved slowly, perfectly in sync.

Sleet lost interest in the chatterbox brother, instead obscenely focused on those spread out before her. They never spoke. Not once. But this time Sleet felt in her a worry, a sadness resonate from them all in unison. If their arms were spread they would appear as a scarecrow, a ward, a warning for anyone to behold. Even without such a troubling pose Sleet could sense the message they sent (but she did not understand). They silently shook their heads a single time as Fredric opened the doors...

An audacious throne room adorned with dingy treasures emerged from the tremendous entrance. The immense entryway bled into an endless hallway punctuated by spiral staircases that, presumably, reached to the many other floors of this ostentatious home. Some of these treasures Sleet recognized from their former life as the avant-garde tower of hideout’s past. The soaring ceiling gave much to consider, clothed in chandeliers whose candles appeared to dim and brighten with one’s own breath.

Back down to the floor was the essential red carpet drawn out from the entryway. It led across the great room to many steps bowed before a suspiciously simple golden throne. This throne was for the time obscured from sight, turned away from Sleet and Fredric. Her astonishment at what miracle she stood in was palpable (much to the delight of the chief engineer). The delight of Fredric was made doubly known because, for once, he too was speechless. Pleased to revel in the praise of Sleet.

“How is this possible?” Spoke Sleet once she found her voice.

“C’mon you know how. King! All these guys listen to ‘em.” Fredric tossed an upheld thumb behind his shoulder towards a patience Instrumentalist butler. He attended to the mess they trekked in from outside.

“And boy are they strong. Just like me!” Fredric flexed his thin arms to accentuate his point.

Sleet couldn’t help but giggle at the little boy’s bold confidence. He was small even compared to King. That is, before King grew up so fast. So fast, too fast, too soon did he arrive at the Mansion. It… Wasn’t quite done yet. Fredric knew it and so did King.

Abruptly, a series of lamp stands that adorned the periphery of the throne steps lit up. A terrible screech assailed the ears of Sleet and Fredric as the golden seat slowly dragged itself around. King revealed himself upon the throne. His lowly, lanky figure contrasted heavily with his otherwise lavish surroundings. Elbows sat on his knees, hands held folded together at his chin. The one sleeve remained in tatters, the rest of his tight clothing strained itself with slouched posture.

“You were ‘spose to be finished Fredric.” Accused King.

“W-What? I mean, ya’. But you’re early!” Cried Fredric distraught with the displeasure of King.

King grimaced. “Was what I gave you not enough?” King held his face. Standing upright he descended meticulously down each step. His attention never wavered from the current target, seemingly unaware of Sleet’s presence. Fredric was on the verge of tears but a tear never dripped. The boy was beside himself with grief at King’s disappointment.

King stood not an arms length from them looking down in distaste. Sleet made every effort to be small and unseen. She did not want another threatening encounter directed so personally at her, or worse. Yet her fears were realized. King raised a clenched fist and laid soft hand on the shoulder of Fredric. Would he truly strike his own brother? What should she do? Sleet was at a horrible crossroads, unsure of herself and the company she kept.

Before King’s trembling fist could chance a strike the door burst open comically knocking aside the diligent butler. The moment of tension was shattered with the oohs and ahs of the rest of the gang. An authoritative long-yellow-haired brother did not permit himself the surrounding mesmerization. He scowled judgmentally at King’s outstretched arm. After a brief pause and deadlocked eyes; King sneered, huffed, and turned away as the oblivious brothers flooded the Mansion reflecting the same awe Sleet felt not but a few seconds prior.

Sleet released her breath. Fredric leaned against her whimpering sadly. A crumpled note was slipped into her pocket. Fear flew from them this time.