Where Things Went | Act I | Chapter 1 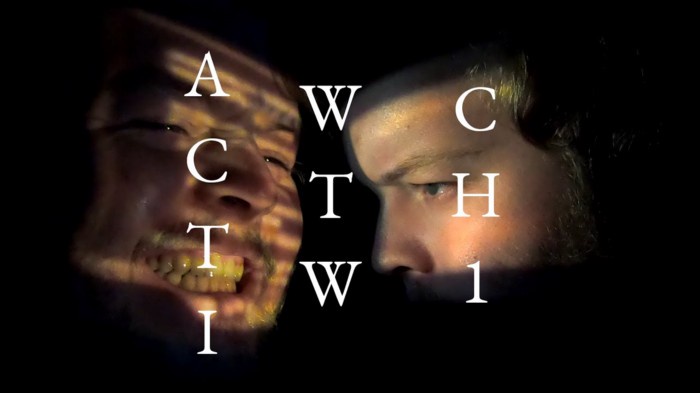 The plane had taken damage. Its propeller, stopped. Smoke billowed from its engine. The pilot couldn’t be seen in the cockpit. No one knew who was behind the controls. But it was falling. Falling falling falling. It was in a death-spiral. A plummeting descent from the clouds trailing smoke toward the ground.

It fell for sometime. No one knew how long. Not even the girl watching. She didn’t know how long she’d watched. How long she waited for this plane to crash. Or for the pilot to regain control and save himself. Save his plane. Which was it? What would happen? She wanted to know. She wanted to know.

It was exciting. It was thrilling. She was on the edge of her seat in anticipation, in tension. Her boots were on the seat. Her arms wrapped tightly around her knees. She leaned in very closely. Watching watching watching… From the best spot in the whole theatre. Front and center, leaned forward, looking up. Her bright white eyes reflected the silent film in front of her.

She was, alone. She had always been alone, but only now did she realize it. Confusion! The screen was black… The room was black… And Sleet, befuddled. All she knew was this room, this film, and the anticipation of the end. Not this darkness. She unlatched her arms. Cautiously, she crawled out of her seat. She could see nothing. She could hear nothing.

She felt her way around and found the steps. She took the steps, up up up! The faintest light crept through the cracks of the theatre doors. She opened them and entered a lengthy hallway. Could see a little bit better now. Stale dust moved lazily through the air, disturbed by the presence of this strange girl. Frail, pale, she swam in dark clothing that lagged behind her every move followed closely by her long hair.

One step after another, gingerly she made way to the glass entrance of the lobby. Past the concessions, past the arcade, past the ticket counter, past the empty popcorn stand. Each step echoed loudly through the desolate theatre as boot struck carpet, then tile. Once at her exit, she paused. She stood with rigid trepidation arms slump at her side.

“S-Should I really leave? What things are out there?” Pondered the girl.

A single faint step echoed in reply. It was not hers. Much quieter, but in the stillness it may as well been a parade. Sleet shot a concerned look at the noise. Then back at the door, then back again. Her resolve to leave was weak but now she was scared to stay! With a wince, she pushed the doors open.

She entered a courtyard and proceeded through a series of pillars that upheld a tattered festive awning. Twilight twinkled through the holes like stars in the sky. Sleet dutifully followed the stars to the end. She stood on a street corner, but dared not take one step further. She was flooded with light up to her neck.

The dark starry awning sky ended. The setting sun split at this awnings end shading only Sleet’s pretty face. She looked down at her hands, her hands that barely poked out the large sleeves of her jacket. It was marvelous, fascinating. The light shone on her now. Then, the creeping light crept up her face whilst she marveled at her fingertips. It wasn’t she that moved, but the light.

That light, that sun, that spotlight over the horizon dipped just the slightest bit lower. Ever so slightly downward it drifted up into Sleet’s eyes. Her awe was interrupted by the foreign glare. Mistakenly, she glanced towards street and sky’s kiss. Ouch! Pain pain pain in my eyes! She snapped away, shielding herself from the sun with one hand and rubbing her eyes with the other.

Odd. Her eyes were closed yet she saw stars again. Whilst blinded from her little blunder, a terrible scuffle broke the silence. She could hear sprinting feet and angry voices approaching her. Faster faster faster. Splashing puddles and frightening screams strode her way. Troubled, blinded, hand still raised to ward off the bright invader, Sleet didn’t know what to do! Who was it? What was it? Before she could gather herself a swift figure past her by and snatched her upheld hand. Now, she was running.

Shouted a thunderous voice from behind. Sleet saw her pursuers, two fat giants bumbled after them. The both of them were bulbous, bellies hung out their ragged clothing. Their saggy skin shone a splotchy purple & pink color, heads as bald as a newborn. They stood two-and-a-half men tall but lacked the skill to put their weight or height to any good use. Instead they chased after a blur and the blur’s unwitting accomplice. The view of them faded in an instant as her guide wove through the alleyways.

A boyish voice laughed playfully to himself. She caught a glimpse of his face as he looked back to mock the much uglier duo. Smugly he smirked through his shaggy red hair. Serious ruby eyes starred daggers at their foes before he turned back wearing an indestructible grin. She glanced down and beheld what the boy carried in his right hand… A magnificent Crown glittered, bejeweled with gems of many colors. Almost perfect, almost flawless, yet clearly one gem was missing.

Sleet took a gander at the greater City on her rushed tour. Past the dreary, destroyed buildings that dotted every street. Some were small like her modest theatre home, others several stories high, others you could tell used to be much more grand. Most strange was the tremendous black building seen from anywhere they traveled. It towered over all, a massive skyscraper. Before a better view presented itself they came to a sudden stop.

After a few more sharp turns, jumps, ducks, and slides the pair pressed closely against the lifeless walls between two dilapidated buildings. The boy let go of Sleet’s hand and raised a silent finger to his lips. In the distance, the grunting and growling of the nasty brutes slowly came to a close.

“Haha! I did it! Iiiiii did it! Wait ‘till they see! Wait ‘till my brothers see!” The boy smiled as wide and deep as the ocean. He hugged the Crown tightly in his arms and spun in circles with glee.

While the rambunctious boy distracted himself with celebration, Sleet was finally able to assess her semi-savior pseudo-kidnapper. His clothes were heavily worn, torn all over. Muted brown jacket ripped at the elbows and scuffed throughout covered a drab tan t-shirt. Dark pants lead to treadless shoes, untied, holes where toes would sit. Each article of clothing was a size or two too big for him (clearly hand-me-downs). Whoever this boy was he was pauper through ‘n through.

In this moment he forgot the girl he swept up with him. He motioned to put the Crown on his head. A loud crash halted his self-ordination. Sleet, reeling from the excitement, backed away from the boy only to clumsily trip over trash in the ally. She landed squarely on her rear, ending the commotion with a soft embarrassing thud.

“Oh, what’s your name? Come ‘ere, let me show you this!” The boy hoisted her up and began moving trash piles out of the way.

The boy’s work revealed a small window opening level with the concrete. The opening lead inside the abandoned building, but Sleet couldn’t see what secrets lie inside from here.

“Sleet? That’s a coo-, Ah! There. Come come! Come on in!” He slipped skillfully through the small secret entrance, Crown in hand.